Earlier this week Jonathon Pie shared this video, which I agree with, so I shared on Facebook:

It’s a bit of a rant, but I think he makes some very valid points, notwithstanding his style.

I do need to point out that when he says “if you feel my mansplaining is triggering you can fuck off” he is falling into the very trap – insulting people – that he urges the Left to avoid. I wonder if that is why some people are rejecting his message -this morning my Facebook feed told me that one of my friends had liked this post: 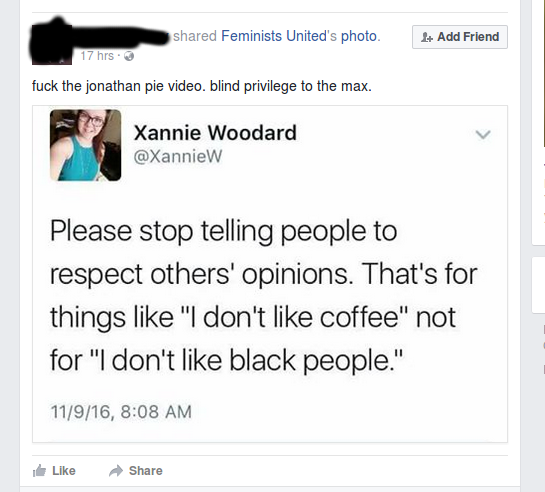 I think this tweet/share is a mis-comprehension of what Pie is saying. He’s not saying respect other people’s opinions, he’s saying: respect their right to hold those opinions. Because at the moment those opinions, those voices, are being SILENCED: removed from the forum of public debate.  This is particularly true in the media: Pie is spot-on that the Left-leaning media has demonized the expression of Right-leaning sentiment, to the extent that people have stopped saying it…. but then vote the way they really feel. END_OF_DOCUMENT_TOKEN_TO_BE_REPLACED